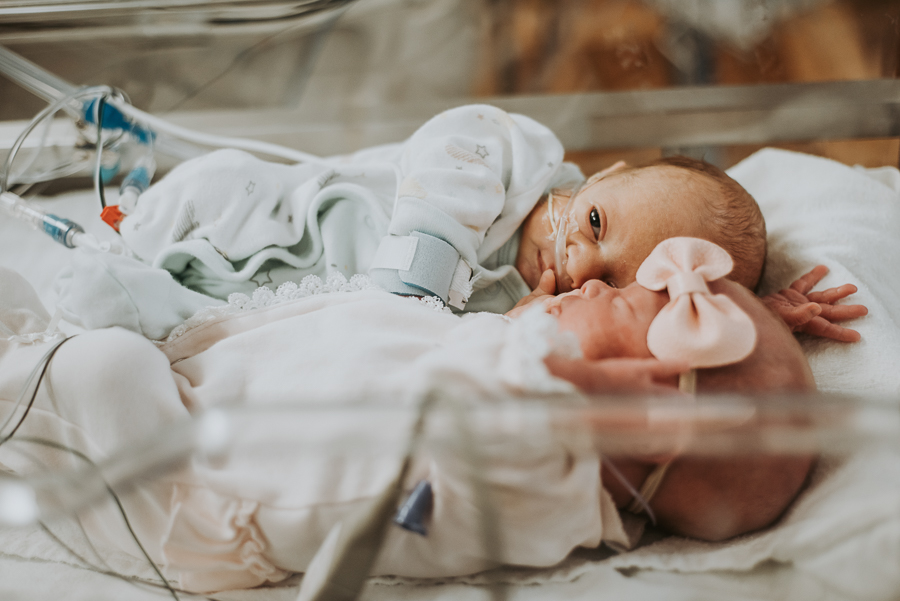 The NICU (Neonatal Intensive Care Unit) is such a vulnerable place to be as a parent. As a previous patient and volunteer for St. Vincent NICU in Toledo, I’ve felt and seen it all. I’ve had the honor to photograph families in hopes of bringing them peace and joy during what can be the most challenging journey emotionally and mentally.

Today, I am sharing an extraordinary NICU story. Clerissa, who became more like family, shares her story as her sweet family embarked on an unforgettable experience. She wrote:

I hung up the FaceTime call after talking with my husband, Evan, while he showed me our 3-year-old daughter summersault at gymnastics! I started putting laundry away when I felt that “gush.” Evan quickly made it home, and we rushed to the hospital. I was only 25 weeks with my sweet little twins- I knew it was too early.

They admitted me to the hospital after having PPROM-ed (Premature rupture of membranes.) Our son’s water had broken. We’d hoped it would slow down and give us more time to let him and his sister cook a little longer. This began our journey of a 7-week hospital stay on bedrest. We had multiple scans to check for fluid levels and the babies’ growth during that time. On one of the scans, the doctors noticed that our son had some abnormalities in his heart. So they scheduled me for a fetal echo where they noticed he had a small hole in his heart, an ASD. We were told these could be common with IVF babies (which our twins were) and that they can typically close on their own over time.

On the morning of 31 weeks/2 days, our babies were born. Ivy and Emmitt were here! Due to Emmitt’s ruptured sac, we decided it would be safest to deliver them via C-section. We didn’t want a vaginal birth and a c-section if things went south. Ivy was born first. They brought her head closer to me to see her sweet little face. Emmitt was next, but they rushed him down to the NICU because he was in fetal distress. They brought Ivy down there soon after while I went to recovery. My husband and I knew something else was going on. There were many phone calls to our nurse and folks in and out of the recovery room. Thankfully, I could rest and get the anesthesia out of my system before they came in to talk to us. 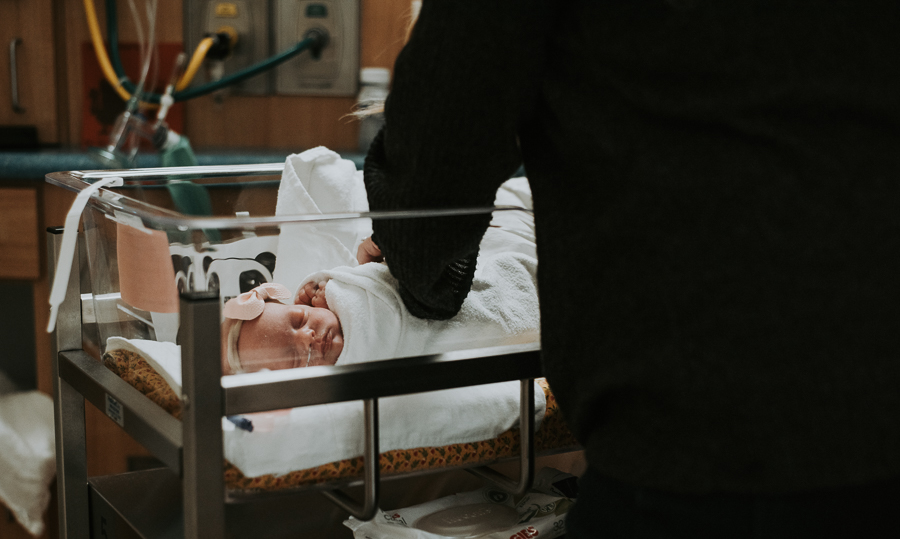 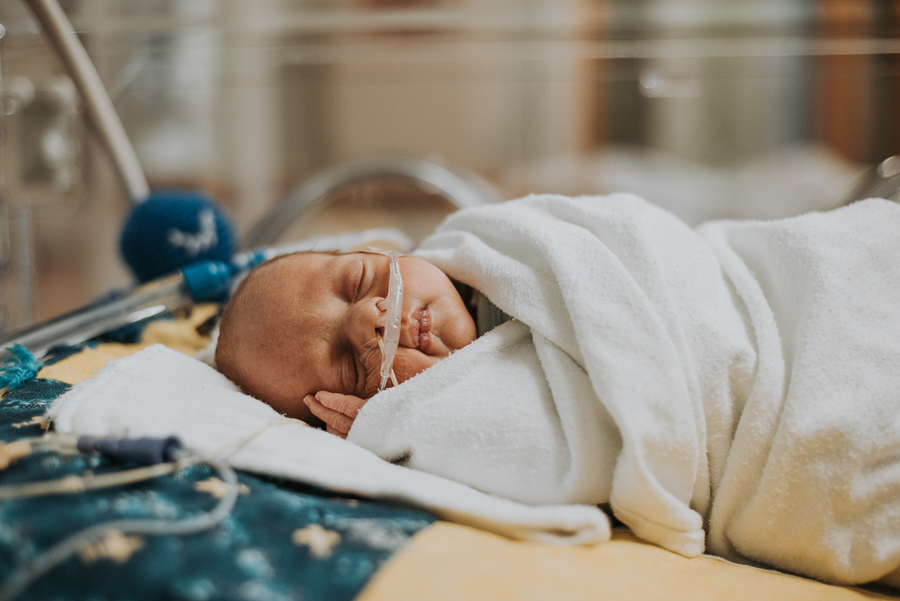 They informed us that Emmitt had a TEF (tracheoesophageal fistula) which meant that his esophagus was attached to his trachea instead of his stomach. The nurses realized this when they couldn’t pass his feeding tube into his stomach. It became an emergency situation because he could not receive the nutrients he needed. We came down to the NICU, where I could hold our son for a brief moment before passing him off to the transport team for Mott hospital in Michigan, where he would have his surgery that afternoon.

It was the strangest feeling, only being able to see one of my children for 2 minutes before passing him to strangers. He was transferred to a different state than where his sister and I were. My husband went to Michigan that afternoon to be with him while I stayed in the hospital with Ivy to continue recovering. 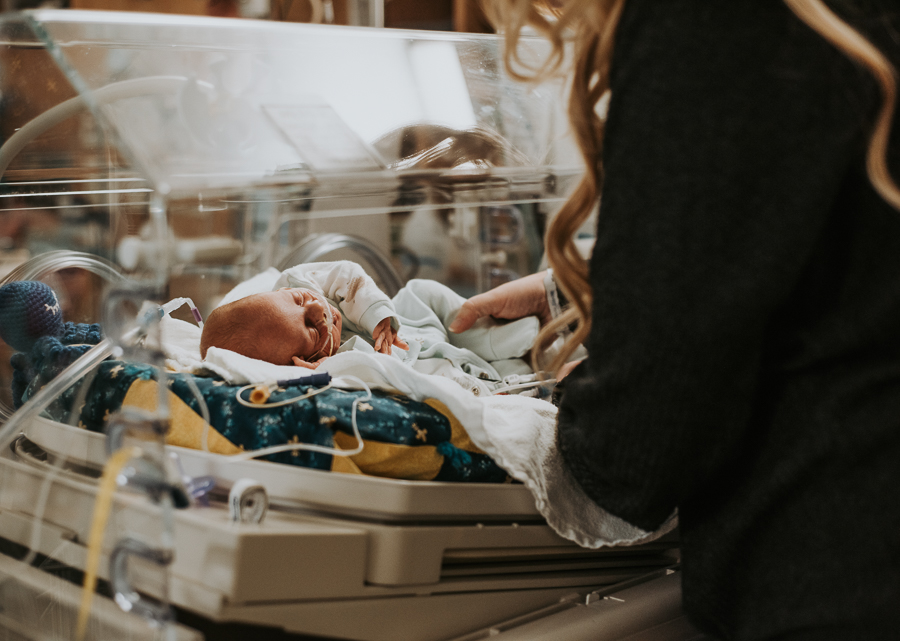 Our little Ivy was such a little trooper. She just needed to grow and develop with extra help from the NICU team. It was a blessing to know we had one of our babies who weren’t having as serious of issues. My husband sent continuous updates for me along with FaceTime. His surgery was successful, and they were hopeful he would make a full recovery. Three days later, I was discharged and able to head to Michigan to see Emmitt. I always felt so torn going back and forth. I felt as if I was abandoning one of my babies constantly. But, I knew this was just the way it was and that they were both being very well taken care of. 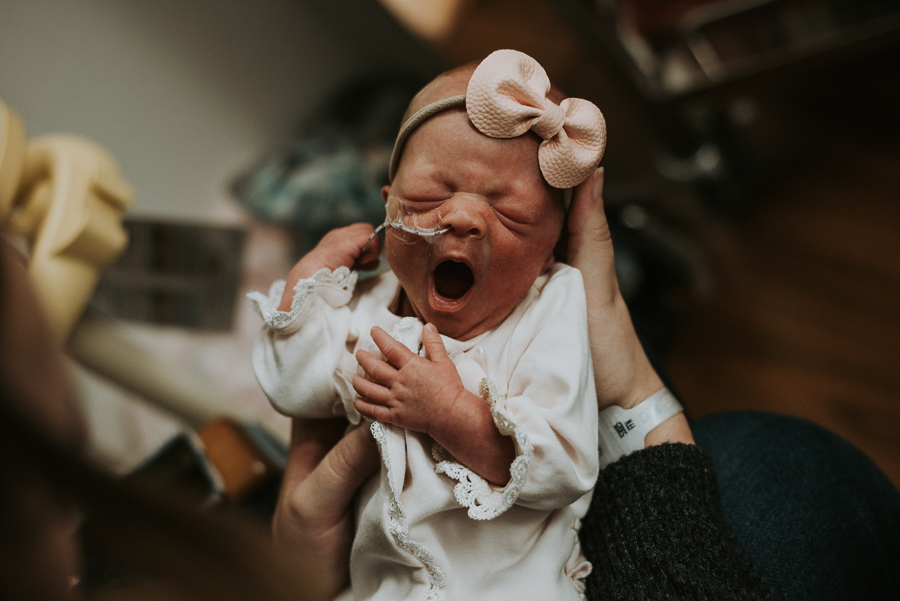 When we finally made it to Michigan, I got to see him…it was heartbreaking! He mainly was wires and tubes. I felt like he had something coming out of almost everywhere. He was still too unstable for me to hold him, but I stood next to his little NICU bed and held his hand. The doctors were unsure when he would be able to be transferred back to St. Vincent’s NICU with his sister, so the waiting game continued. 4 days later, I finally got the call that he would be transferred back to St. V’s! Walking into the NICU and seeing TWO babies was incredibly overwhelming. Our family was finally beginning to heal together! 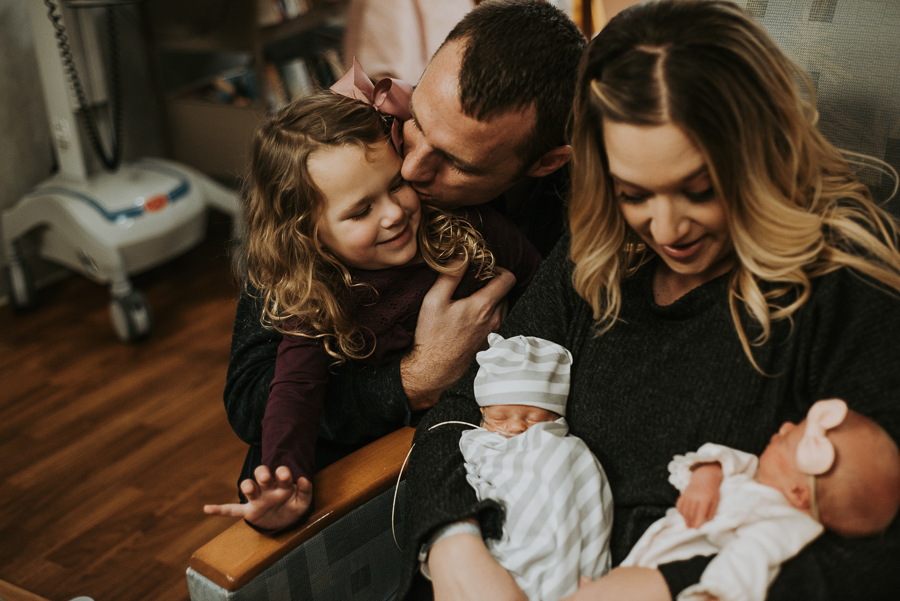 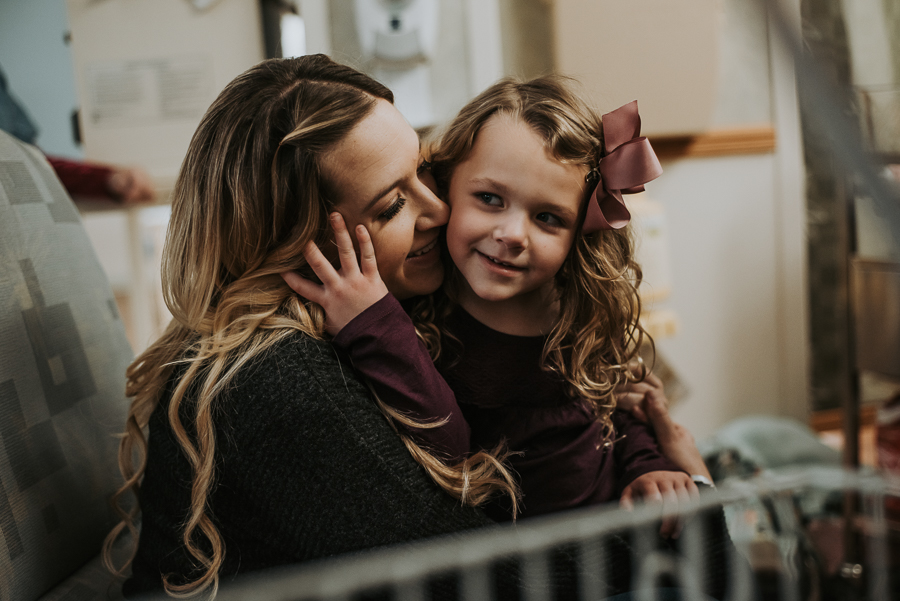 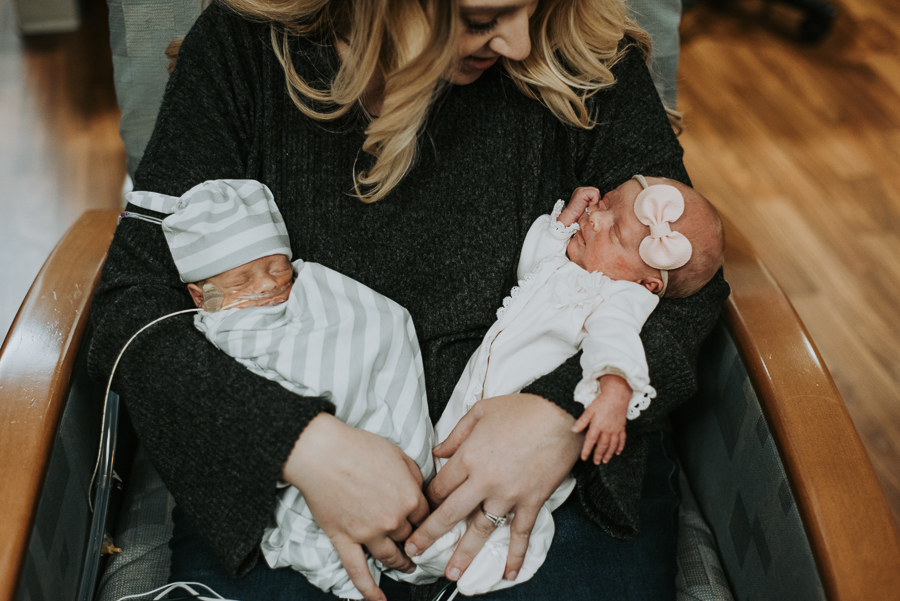 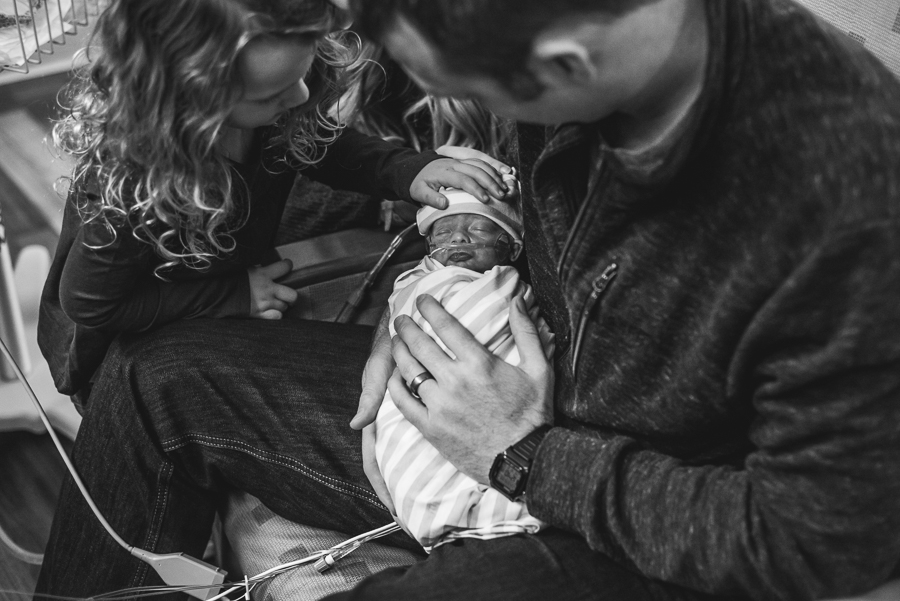 Life in the NICU

The schedule of a NICU mom is constant back and forth between the hospital and home, especially since we had our 3-year-old daughter Emilia at home as well. However, the day-to-day seemed to stay pretty routine with the constant waiting for more progress and the hope of that eventual discharge day.

Pictures are SO special to me. I had been struggling with the fact that I didn’t have any of my little family. I saw a  flyer in the family waiting room, for a complimentary NICU photo session. We applied and were chosen! We headed to the NICU and met the incredible Tiana! She instantly made it feel like we were just at home with our little ones living a regular day in life. She captured such precious moments of baby swaddling, big sister kisses, and the most special picture of all 5 of us! Since it was winter, the NICU closed access to children under the age of 12 due to flu and RSV season…they had made a special expectation for Emilia so we could get these photos, and it meant everything!!

After 32 days, Ivy was finally discharged! We were so proud of her and all the progress she had made! But of course, it also was sad to know her brother would be staying without her. Emmitt continued to have his ups and downs. He struggles with feeding, continual echos, heart checks, and some other minor issues they had discovered while he was there. Our new normal had become home and hospital and back again and again. I was so grateful for the incredible staff that was so supportive and caring! They let me know my son was safe and loved even when I couldn’t be there with him all the time, which meant the world. After MANY more ups and downs with Emmitt’s health, they finally discharged him after 84 days! 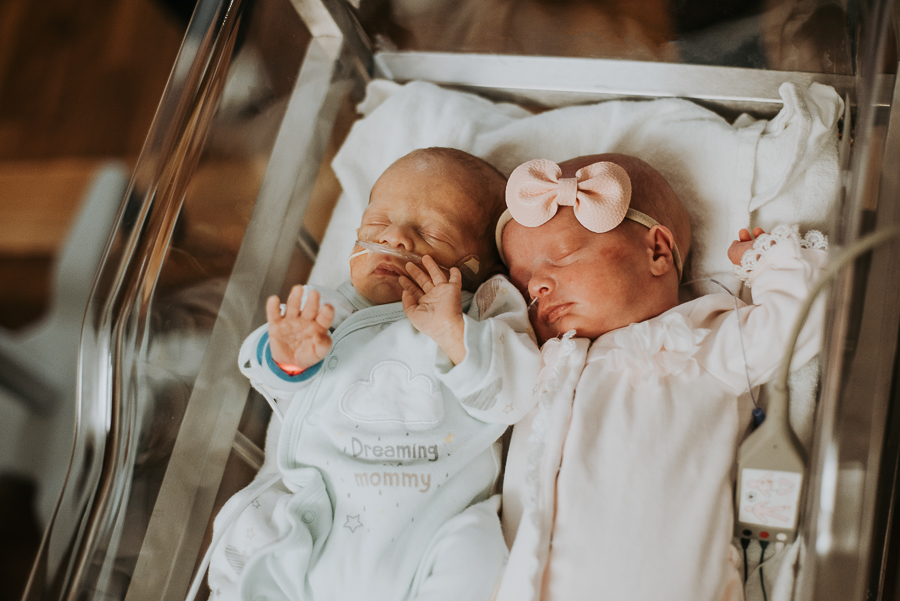 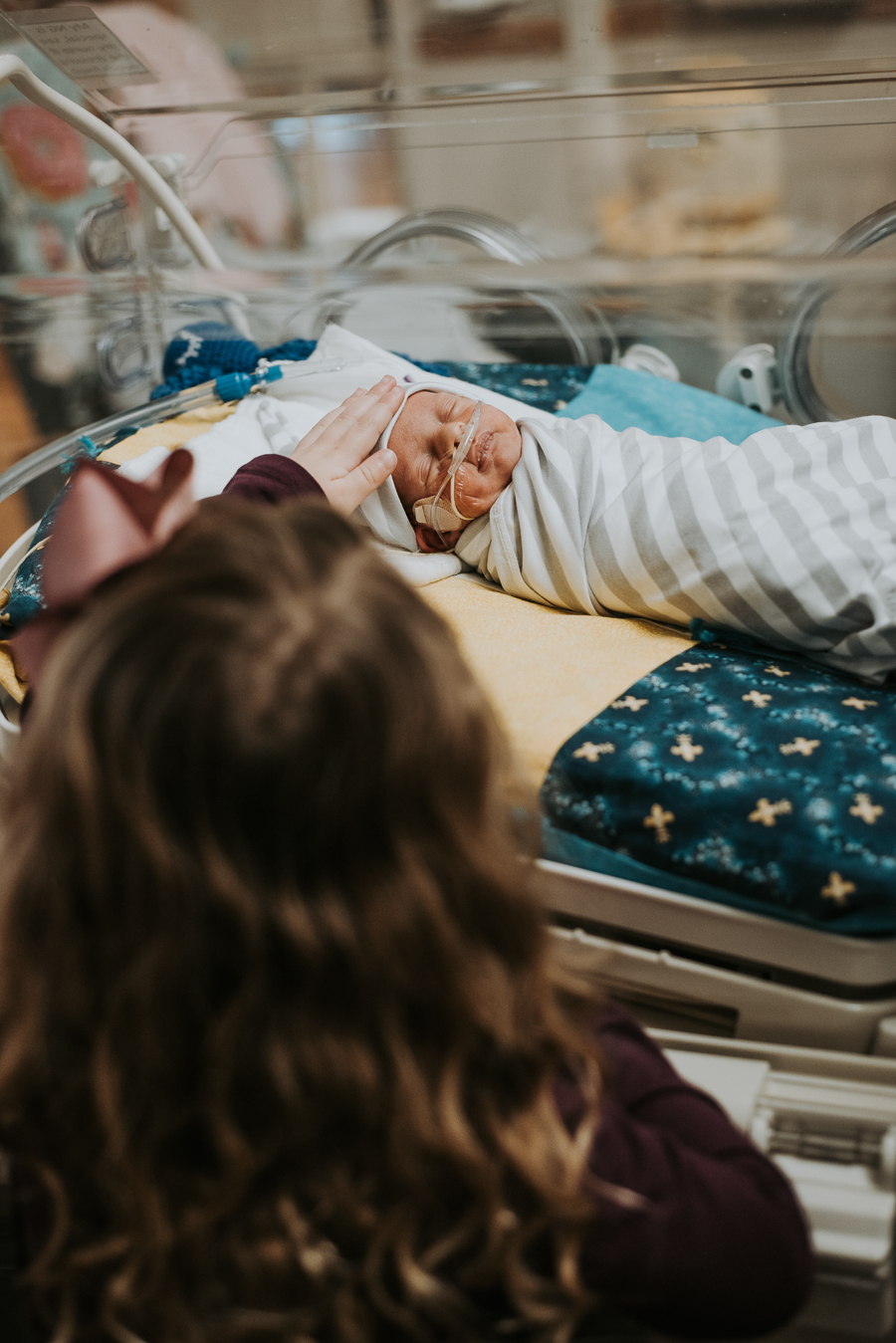 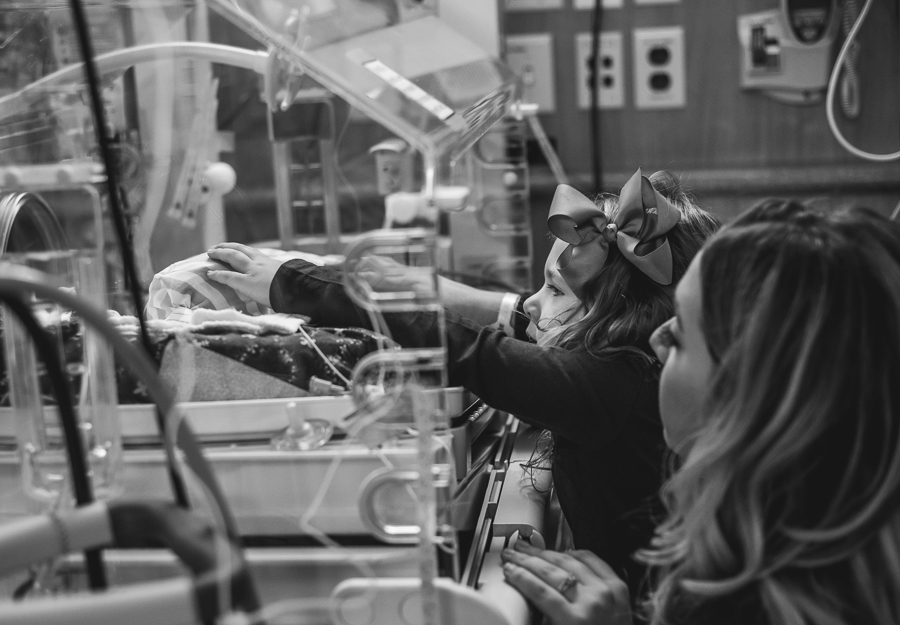 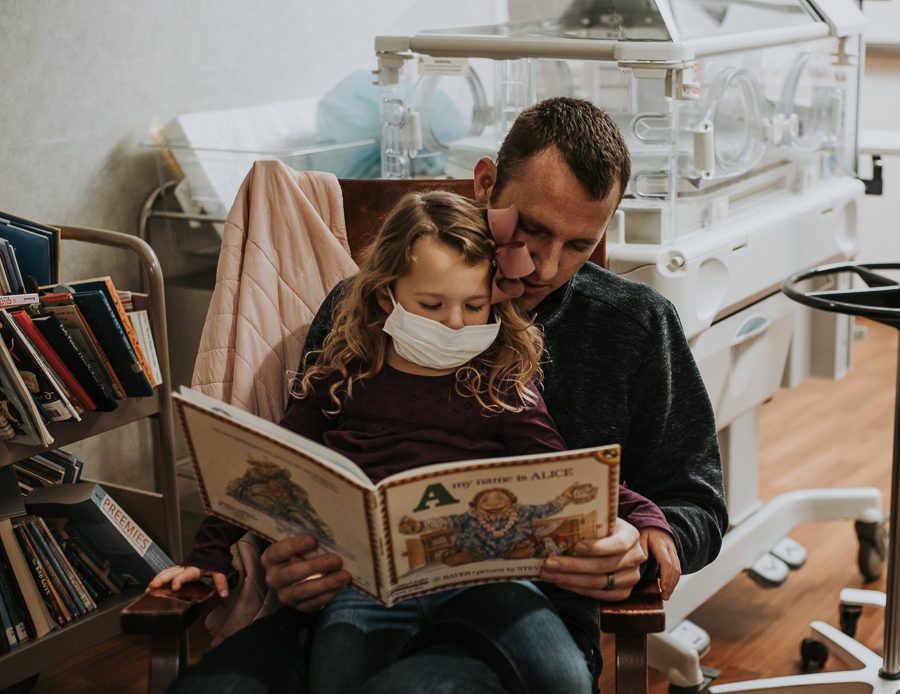 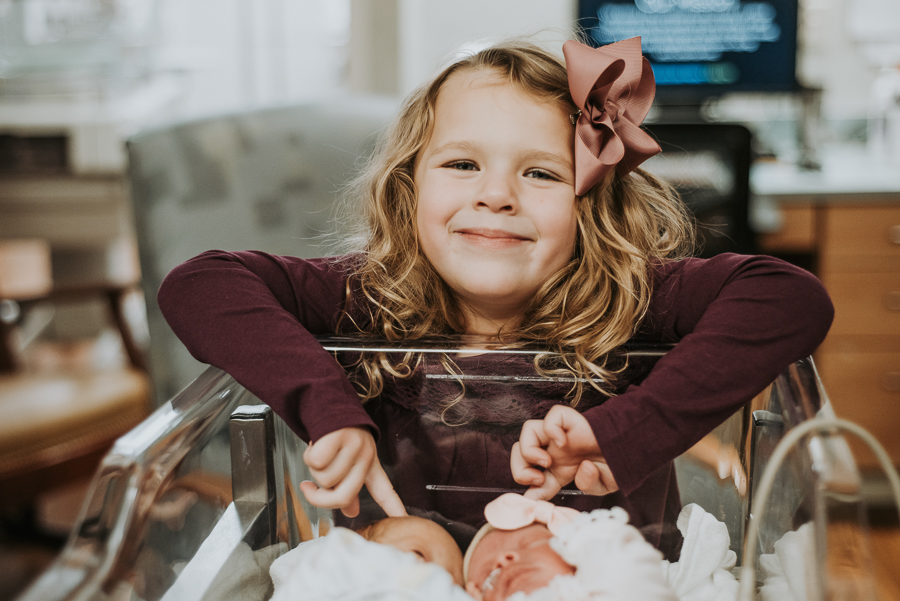 Life After the NICU: Going Home

Emmitt’s coming home was much different than Ivy’s, though. He came home on oxygen, his feeding tube, and a heart and breathing monitor. We had a mini NICU set up in our home! But, we didn’t mind since we could have our little man home and have our family complete under our own roof! We so enjoyed staying home together, laying all the kiddos on the floor for pictures, and watching our twins swing in tandem in the baby swings. We knew Emmitt still had a long road ahead with multiple specialists appointments and therapies, but we were ready to take it on!

On the morning of his 4th day home, his heart monitor started going off. I did the things the nurses had instructed me to do to get him to wake up a little, and the monitor stopped beeping at us. However, moments later, it went off again for his heart and breathing, which meant his heart rate was too low, and he was no longer breathing. I started CPR and called 911. My husband, who at the time was a medical student at St. Vincent’s, was rushing home after my call to him, telling him what was going on. Emergency services arrived and continued CPR. Shortly Evan made it home as well.

We followed the ambulance to the hospital, not knowing what was happening or the outcome for our sweet Emmitt. Finally, after many rounds of CPR and getting him intubated in the ER, our Emmitt boy made his way back to his loving Heavenly Father. Losing a child is not something you ever imagine that you will experience, and a piece of you goes with that child…but for me, that piece went with Emmitt for him to hold onto until we meet again. I know I will see my sweet boy-o again and that he is here looking over all of us. Especially his adorable twin sister Ivy!

I don’t know if you ever fully heal from losing a child, but I know that bond never fades. 2 years later, we still talk about Emmitt every day. We know he is also up there preparing his little brother to come to join our family in just two short months. Our family continues to grow and heal and live and love, but I believe our lives have been most blessed and continually enriched by the love our sweet son Emmitt gave to us and continues to give to us every day!

Giving back always has and will continue to be a part of my business. This was the first time I’ve encountered loss with one of my clients. It felt personal because I had built such a great relationship and friendship with the Seamons family. As a NICU mom, it means the world to me to provide families in the NICU with tender memories. These were some of the last photos taken of Emmitt. While this story took place a while ago, it’s had an even more significant impact on me as a mom and business owner. It only increased my desire to show up for these families. If you know a family in need at St, Vincent’s Toledo, have them apply for their free session! To understand the Seamons is to know that God’s love and grace are abundant in their lives.

We were featured on our local news! Check it out. 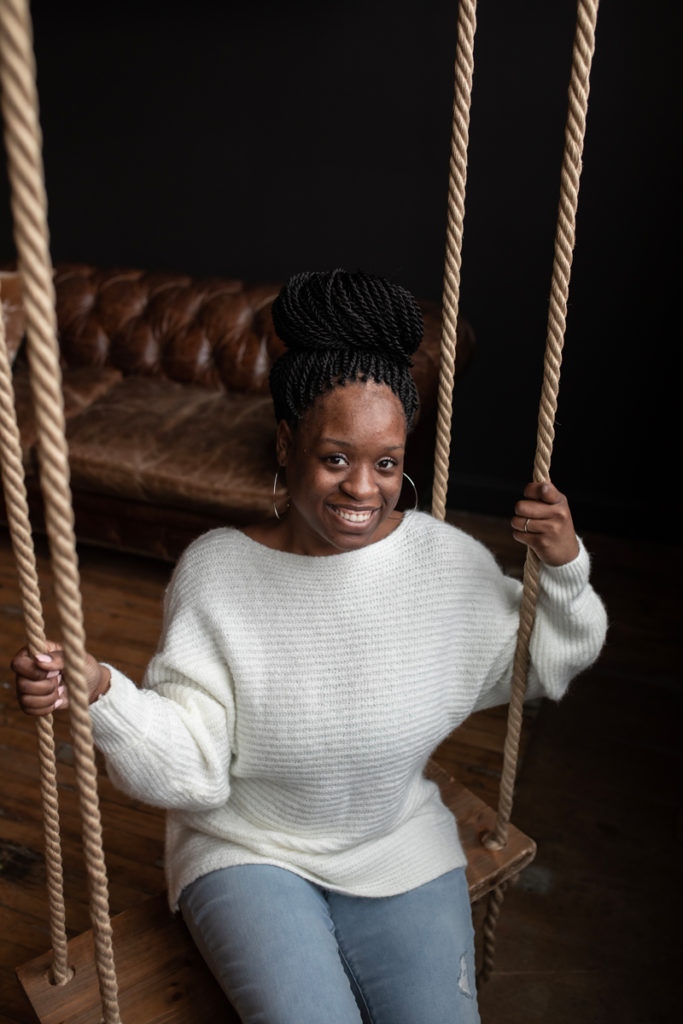 I am a wife, Mama of 4 + 2 bonus babies, adventure seeker, and chocolate lover!  I was born in Chicago, raised in Detroit, and currently living my best life here in Toledo.